In its annual report to Congress about the CFTC whistleblower program that was released last week, the CFTC reports that in FY 2018 it more than doubled its previous total number of whistleblower awards, from four awards before 2018 to a total now of nine.

Another highlight in FY 2018 for the CFTC whistleblower program was the payment of the largest whistleblower award since the CFTC program was created in 2010 – $30 million. That is three times  the size of the previous largest payment, which was made in 2016.

“The award … is a demonstration of the program’s commitment to reward those who provide quality information to the CFTC,” said Christopher Ehrman, Director of the CFTC’s Whistleblower Office, in a statement about the CFTC’s record-setting $30 million award in July. “We hope that this award will continue to facilitate the upward momentum and success of the CFTC’s whistleblower program by attracting those with knowledge of wrongdoing to come forward.”

The CFTC paid whistleblowers a total of $75 million in FY 2018, eclipsing the $10.65M total that the agency had paid out since the inception of the program. Other notable achievements in FY 2018 include:

The CFTC’s whistleblower program offers rewards to whistleblowers whose tips result in $1 million or more in monetary sanctions. Whistleblowers receive between 10 percent and 30 percent of the amount collected. Rewards are paid out of the Customer Protection Fund established by Congress, not from the sanctions that are collected in the case. 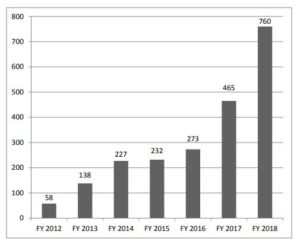 As required by the Dodd-Frank Act, the CFTC keeps the identity of whistleblowers confidential.