Why be an SEC whistleblower?

Securities and Exchange Commission whistleblowers may receive a reward for reporting securities law violations if the SEC orders more than $1 million in sanctions as a result of the whistleblower’s information. SEC whistleblowers also are entitled to confidentiality and protection from job retaliation. 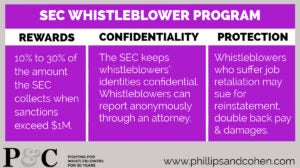 SEC whistleblower cases and claims that have been filed with the SEC make a range of allegations, including accounting fraud, mispricing of stock, insider trading, money laundering and violations of the Foreign Corrupt Practices Act (FCPA).

Both US citizens and foreign nationals may file SEC whistleblower claims and receive rewards.

SEC whistleblowers are responsible for enforcement actions with more than $2.5 billion in monetary sanctions. Out of that total, $1.4 billion was for disgorgement of ill-gotten gains and interest and almost $750 million has been returned to harmed investors.

The SEC has awarded more than $735 million to 127 whistleblowers since issuing its first whistleblower award in 2012.

[Want to talk to experienced SEC whistleblower lawyers? Contact Phillips & Cohen for a free, confidential review of your matter.]

The money paid to whistleblowers comes from the Investor Protection Fund created by Congress and financed through monetary sanctions the SEC collects from securities law violators. No money is taken or withheld from harmed investors to pay whistleblower rewards.

[Read about the SEC’s review of recent changes to whistleblower award rules.]

The Dodd-Frank Act specifically states that employers may not fire, demote, suspend, threaten, harass or discriminate against an individual who provides information to the SEC or assists the agency.

Whistleblowers who suffer job retaliation may sue for reinstatement, double back pay and any other damages that occurred (such as litigation costs and witness fees), if they reported their allegations to the SEC before the retaliation happened.

In addition, the SEC has the authority to take enforcement actions against companies that retaliate against employees because they reported a potential securities law violation. Congress granted the SEC this jurisdiction over retaliation issues for the first time by placing the anti-retaliation sections of Dodd-Frank Act into the Securities Exchange Act of 1934.

Exchange Act Rule 21F-17(a) says that “[n]o person may take any action to impede an individual from communicating directly with the Commission staff about a possible securities law violation, including enforcing, or threatening to enforce, a confidentiality agreement . . . with respect to such communications.”

The SEC has exercised this authority many times. One case involved a firm that essentially sidelined an employee who provided information about alleged violations that led to an SEC enforcement action.

In another case, the SEC fined a company for firing an employee who had raised concerns about possible securities violations, even though the employee’s concerns turned out to be unfounded. The SEC also investigated a company’s claim that a whistleblower was fired in connection with a reduction in force. The SEC determined that in actuality, the whistleblower was terminated in retaliation for raising concerns about certain accounting practices.

In each instance, the SEC imposed significant fines on the retaliating company because they violated the SEC whistleblower statute.

The SEC enforcement actions against retaliation are separate from the legal actions that whistleblowers may take if they suffer job retaliation.

The SEC has adopted a rule to punish companies that implement codes of conduct or employment contracts that would stymie their employees from reporting potential misconduct to the SEC.

Rule 21-f(17)(a) states that “No person shall take any action to impede an individual from communicating directly with the Commission staff about a possible securities law violation, including enforcing, or threatening to enforce, a confidentiality agreement . . . with respect to such communications.”

The SEC’s stance sends a message to potential whistleblowers that they should not feel intimidated by any threatening language in their employment contracts that suggests they are prohibited from reporting to the SEC or feel constrained by contract language from reporting potential securities law violations.

The SEC has brought a number of enforcement actions under the rule.

Some examples of problematic language in contracts that companies use to try to improperly muzzle and intimidate potential whistleblowers include:

If whistleblowers have signed contracts with any of those types of restrictions, they should consult with an experienced whistleblower attorney to make sure they are protected before they go to the SEC or report internally.

[Questions or concerns? Contact Phillips & Cohen for a free, confidential review of your matter.]

The Sarbanes-Oxley Act also provides whistleblowers protection from retaliation, but that protection isn’t as strong as it is under the Dodd-Frank Act.

Read more about the differences between Sarbanes-Oxley and Dodd-Frank for SEC whistleblowers.

Whistleblowers may report fraud anonymously, as long as they have retained a lawyer to represent them. In some cases, their identities may remain unknown even to the SEC until the time comes for the payment of an award.

The Dodd-Frank Act includes a provision specifically directing the SEC to keep whistleblowers’ identities confidential and prohibits the release of any information that might directly or indirectly reveal a whistleblower’s identity.

Congress created the SEC whistleblower program as part of the Dodd-Frank Wall Street Reform and Consumer Protection Act. Signed into law by President Obama in 2010, the Dodd-Frank Act is a wide-reaching statute developed and enacted in response to many of the issues that led to the 2008 financial crisis.

Prior to the Dodd-Frank Act, the Sarbanes-Oxley Act was the key whistleblower framework. Enacted in 2002 in response to stunning, massive fraud by Enron Corporation and WorldCom, Sarbanes-Oxley created criminal liabilities for chief executive officers and chief financial officers and required that companies establish internal controls and procedures for reporting possible financial misconduct.

But the law has major deficiencies. It essentially relies on companies to self-police misconduct, and whistleblower protection under Sarbanes-Oxley is limited.

The decade between the passage of Sarbanes-Oxley and the Dodd-Frank Act underscored to Congress that Sarbanes-Oxley was inadequate for policing securities law violations and that additional protections and incentives were needed to convince employees to report misconduct to the SEC.

We have extensive experience as whistleblower lawyers in cases involving complex financial transactions and other corporate fraud under the SEC whistleblower program as well as other government rewards programs. For instance, we represented the whistleblower who exposed yield-burning in the municipal bond market as well as a Wall Street banker who exposed fraudulent tax shelters involving more than $10 billion of taxable income.