Drug packaging is another way pharmaceutical companies are overcharging 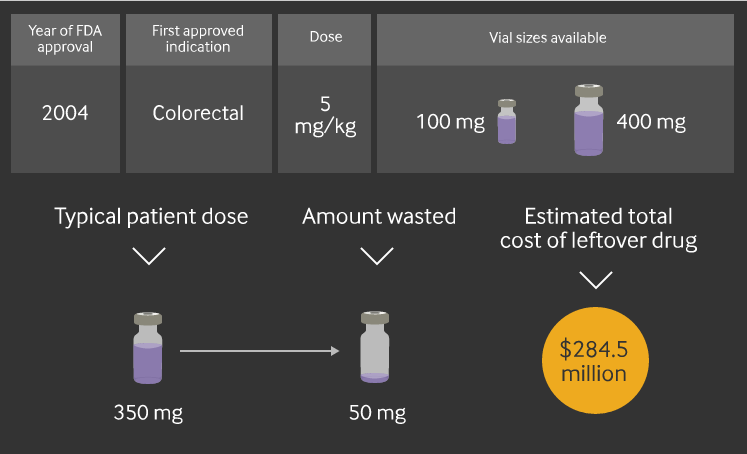 The drug packaging methods of some pharmaceutical companies are forcing insurers, patients, and the government programs like Medicare to pay for unused drugs, according to a recent study. Source: bmj.com

Medicare, patients and private health insurers are wasting billions of dollars a year because of the way drug companies are packaging some of their products.

The waste from could add up to roughly $3 billion in 2016 alone, according to a recent report from BMJ, which was formerly known as the British Medical Journal.

The report details how producers of certain cancer drugs – Amgen, Merck, Genentech, Eli Lilly, and Jazz Pharmaceuticals, to a name a handful – sell their drugs in amounts that are inconsistent with typical dosages.

Take Genentech’s Avastin, which is used to treat a variety of cancers. According to the report, the typical dosage for a 70kg (154lb) patient is 350mg. But Genentech only sells Avastin in vial sizes of 100mg and 400mg. That leads to 50mg of waste per patient.

The estimated total cost of the drug packaging waste in 2016 could be $284.5 million, according to the report.

As of now, it’s up to the drug companies themselves to fix the drug packaging problem. A Merck spokesperson told Marketplace, a public radio news show, the company is moving to a fixed dose to eliminate waste in their drug, Keytruda.

“Drug companies are quietly making billions forcing little old ladies to buy enough medicine to treat football players, and regulators have completely missed it,” Peter Bach, director of the Center for Health Policy and Outcomes at Memorial Sloan Kettering and a co-author of the study told the New York Times. “If we’re ever going to start saving money in health care, this is an obvious place to cut.”

Though the study focuses on pharmaceutical companies that produce expensive cancer drugs, they are not the only ones who employ questionable packaging-related practices, nor is the problem only related to cancer.

In 2013, a company acquired by US Renal Care agreed to pay a $7.3 million settlement for allegedly charging patients for the unused overfill of an anemia drug called Epogen. Amgen, the company that makes Epogen, typically overfills their vials by 11 percent to allow syringes to withdraw the needed amount. Amgen does not charge for this extra 11 percent because it is unusable.

According to a whistleblower lawsuit filed by Phillips & Cohen, Dialysis Corp. of America allegedly billed Medicare for not just the Epogen patients received, but the extra 11% that was thrown away. At one point, Epogen reimbursements accounted for more than 25 percent of DCA’s medical-services revenue.

What the drug companies mentioned in the study are doing is not illegal. They are free to set their own packaging for their own products. But it’s just another example of how pharmaceutical companies will stretch the law – and sometimes break it – to make an extra dollar, no matter the cost to others.