Whistleblowers continue to deliver the federal government’s most significant wins against fraud, with “qui tam” cases responsible for most of the $3.05 billion the government recovered from fraud-related settlements during 2019, according to the latest report on False Claims Act cases published by the US Department of Justice.

In fiscal year 2019, “qui tam” cases brought by whistleblowers generated $2.2 billion of the total $3.05 billion the government recovered from all civil fraud cases brought under the False Claims Act.

“The continued success of the department’s False Claims Act enforcement efforts are a testament to the tireless efforts of the civil servants who investigate, litigate, and try these important cases as well as to the fortitude of whistleblowers who report fraud,” said US Assistant Attorney General Jody Hunt in a press release. 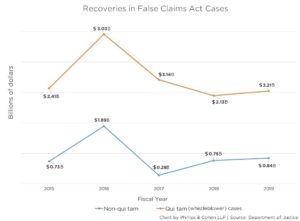 Regardless, whistleblowers continued to file hundreds of qui tam lawsuits on behalf of the government. Whistleblowers filed 636 qui tam cases last year, slightly fewer than the 646 filed in fiscal year 2018.

Some of the largest and most socially impactful qui tam cases that settled in 2019 were in the healthcare sector. A significant number yielded breakthroughs in battling some of the root causes of the opioid epidemic.

For example, pharmaceutical manufacturer Insys Therapeutics paid $195 million last June to settle allegations of widespread illegal sales and marketing practices involving Subsys, a highly addictive and dangerous opioid spray. Maria Guzman, a former pharma sales representative who is represented by Phillips & Cohen LLP, was the first to file a qui tam lawsuit against Subsys, providing the government with crucial information that convinced it to investigate. For her courage and whistleblowing efforts, Ms. Guzman received the “Whistleblower of the Year” award from Taxpayers Against Fraud Education Fund, a nonprofit that advocates for whistleblowers.

The federal government has recovered more than $44.7 billion – excluding billions in criminal fines – as a result of whistleblower cases since Congress overhauled the False Claims Act in 1986. Since then, whistleblowers have received rewards totaling nearly $7.4 billion.

The DOJ’s statistics also exclude qui tam recoveries by state governments. Those sums represent many billions of dollars recovered over the years.