False Claims Act cases recovered $2.8B for US government in FY 2018

Whistleblowers continue to play a major role in stopping healthcare fraud and other fraud against the government, according to the latest statistics on False Claims Act cases released by the US Department of Justice.

Despite the significant recoveries, the total for 2018 is the lowest amount collected as a result of qui tam cases since fiscal year 2009, when $1.99 billion was returned to the US Treasury, and is $1 billion less than was recovered last year through whistleblower cases.

DOJ’s statistics exclude criminal fines collected due to qui tam cases and do not include qui tam recoveries by state governments, such as those from Medicaid fraud cases. Jointly, those represent many billions of dollars recovered over the years.

With lower recoveries, the total amount of whistleblower rewards also dropped compared to the last nine years. Altogether, whistleblowers received $301 million in reward payments in fiscal 2018 for information and assistance that helped stop Medicare fraud, defense contractor fraud and other types of fraud against the government. 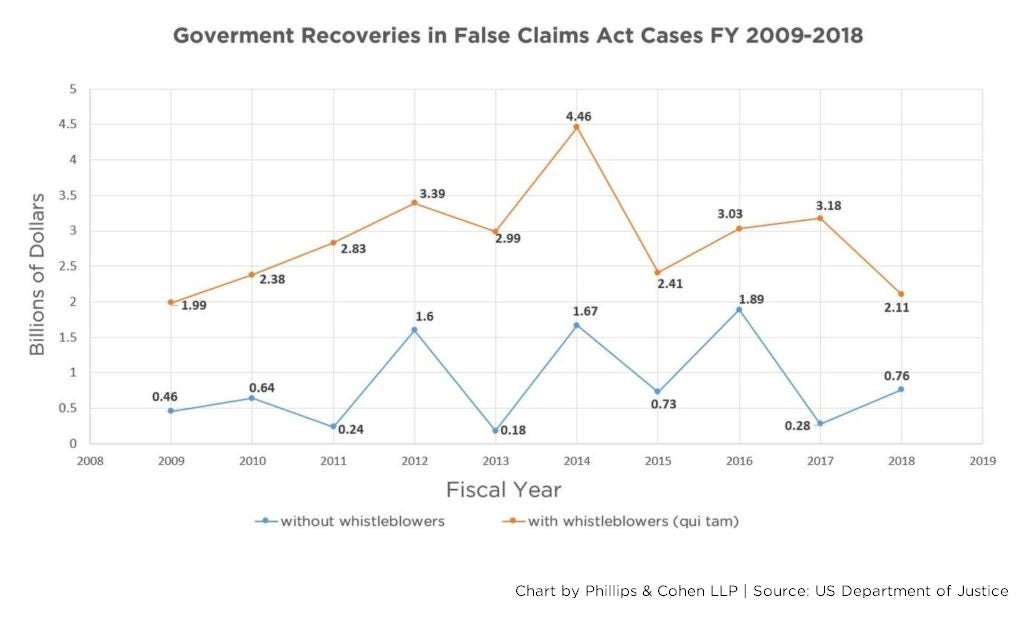 The federal government has recovered more than $42.5 billion – excluding billions in criminal fines – as a result of whistleblower cases since Congress amended and strengthened the False Claims Act in 1986. Whistleblowers in those cases have received rewards totaling more than $7 billion.

If you are aware of Medicare fraud or other fraud against the government and would like to discuss your options with an attorney, please contact Phillips & Cohen for a free, confidential consultation.