Whistleblowers led the charge for $3.7B in False Claims Act recoveries in 2017

Whistleblowers have once again proven to be the government’s strongest weapon in the fight against fraud.

Of the $3.7 billion recovered by the federal government in fiscal year 2017 through False Claims Act lawsuits, $3.4 billion (92 percent) was related to “qui tam” (whistleblower) lawsuits. The federal government has recovered more than $56 billion from False Claims Act cases since 1986, when Congress significantly strengthened the law. That total excludes related criminal fines and false claims recoveries to states, which totals roughly $20 billion more.

The False Claims Act allows private individuals, working with whistleblower attorneys, to file qui tam lawsuits against companies or individuals they allege have defrauded the government. These whistleblowers are then eligible for financial rewards of 15 percent to 30 percent of the total recovery. In total, there were 669 qui tam whistleblower lawsuits brought in 2017 compared to 702 in 2016.

Whistleblowers were awarded $392 million from federal False Claims Act settlements in fiscal 2017 – a drop from fiscal 2016 when whistleblower rewards totaled $519 million. Despite the drop in total rewards, FY2017’s $3.4 billion recovered from qui tam cases were higher than FY2016’s $2.9 billion. 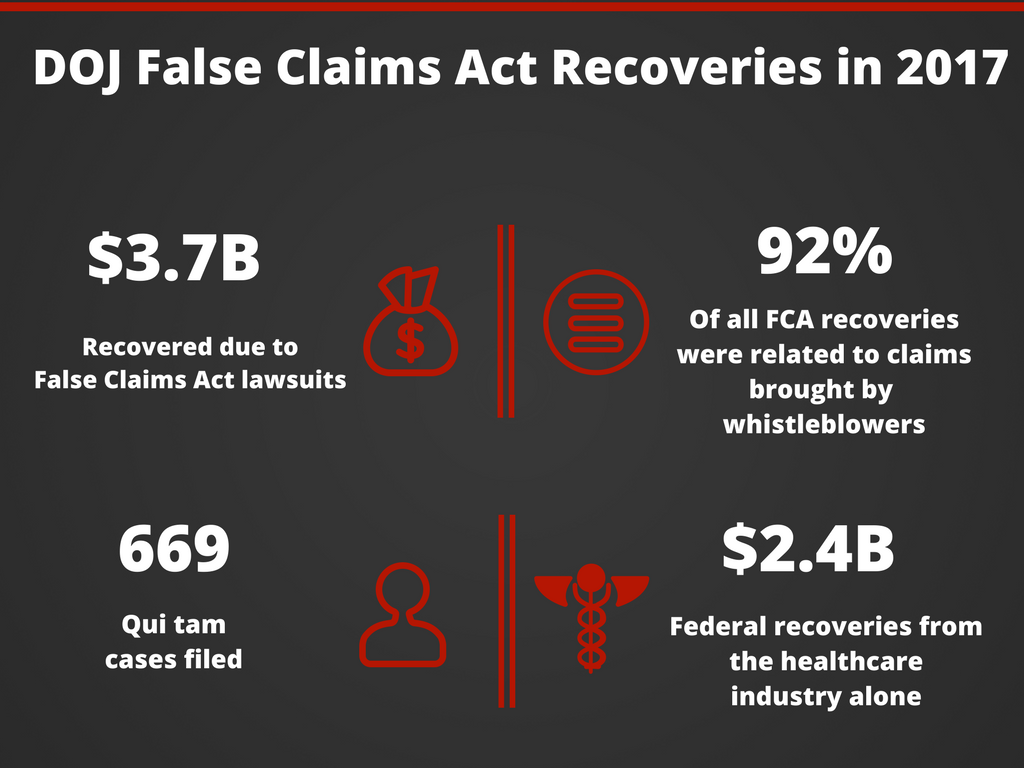 As the numbers show, whistleblowers and their attorneys continue to bring high-quality cases that make a real difference in the never-ending battle to stop fraud, waste and abuse.

“Because those who defraud the government often hide their misconduct from public view, whistleblowers are often essential to uncovering the truth,” said Acting Assistant Attorney General Chad Readler. “The Department’s recoveries this past year continue to reflect the valuable role that private parties can play in the government’s effort to combat false claims concerning government contracts and programs.”

One case DOJ highlights in its FCA enforcement roundup is the qui tam lawsuit against electronic health records vendor eClinicalWorks brought by Phillips & Cohen on behalf of whistleblower Brendan Delaney. The eClinicalWorks case was a first-of-its kind lawsuit that alleged the company falsely obtained certification for its software by misrepresenting that it met all government criteria. eClinicalWorks paid $155 million to the federal government to settle the case.

The whistleblower advocacy group Taxpayers Against Fraud Education Fund gave its annual Public-Private Partnership award to the government team that helped successfully resolve the eClinicalWorks case. The Public-Private Partnership Award is meant to highlight instances where the government, whistleblowers, and their attorneys successfully collaborate on unique or innovative cases.

The mortgage industry also was hit with huge penalties under the False Claims Act in fiscal 2017. DOJ obtained settlements and judgments from civil cases alleging false claims by the mortgage and housing industries that totaled $543 million. Since the financial collapse in 2008, DOJ has recovered more than $7.5 billion from these industries.

One of the largest of these settlements, $296 million, was paid by Allied Home Mortgage Corporation. Allied was found by a jury to have violated the False Claims Act and other laws by engaging in activities that included falsely certifying that thousands of high-risk loans were eligible for Federal Housing Administration insurance, and then submitted insurance claims to FHA when those high risk loans inevitably defaulted.

Despite the amount of fraud that whistleblowers have exposed in the mortgage industry, US Secretary of Housing Ben Carson proposed last year that the use of the False Claims Act was a “problem” and the “improper use of the False Claims Act to impose outrageous penalties against lenders for immaterial defects in loan origination files on FHA loans.” But as Phillips & Cohen partner Erika Kelton wrote in American Banker, “that statement may delight the mortgage industry but does not bode well for taxpayers or the federal government’s future fraud enforcement efforts.” One must only look to past settlements against FHA lenders to see the allegations have been egregious, not “immaterial.”

In addition to the eClinicalWorks case, a number of qui tam cases brought by Phillips & Cohen on behalf of whistleblowers settled in fiscal 2017. These include: