IRS whistleblower program is one of the agency’s “most serious problems,” report says

Yet another report has come out detailing the failures of the IRS Whistleblower program, this time coming from a unit within the IRS itself.

The National Taxpayer Advocate, an independent organization housed within the IRS, said in its 2015 annual report to Congress that the IRS’s whistleblower program is one of the “most serious problems” facing American taxpayers today.

Last year, the GAO issued a report lambasting the IRS whistleblower program for the many issues those who deal with the program are familiar with: lengthy delays, understaffing, and poor communication.

The NTA’s report builds on these common complaints.

One of the more disturbing problems detailed by the NTA involves the actual process of determining a whistleblower award.

The report says that even if all performance goals are met or exceeded during a “whistleblower field audit,” it takes an average of 3.5 years to complete. From start to finish, in the rare event the IRS decides to actually make a payout, it takes five years on average to do so.

(See the below chart for an outline of the complex process most successful IRS whistleblower claims follow.)

Another concern outlined in the report is that though the IRS has the ability to sign a contract allowing it to update a whistleblower and their counsel on the status of a claim, the IRS has never entered into such a contract.

The NTA lists several recommendations to improve the program.

One recommendation was to institute a required bi-annual report to a whistleblower on the status of their claim. Another suggests Congress add a provision to the tax code that explicitly protects whistleblower from retaliation, similar to provisions already found in the False Claims Act.

“This lack of protection could impede employees, who may have unique skills and insights, from investigating and ascertaining whether their employers underpay taxes and from reporting those underpayments to the government,” the report said.

You can read the full report here. 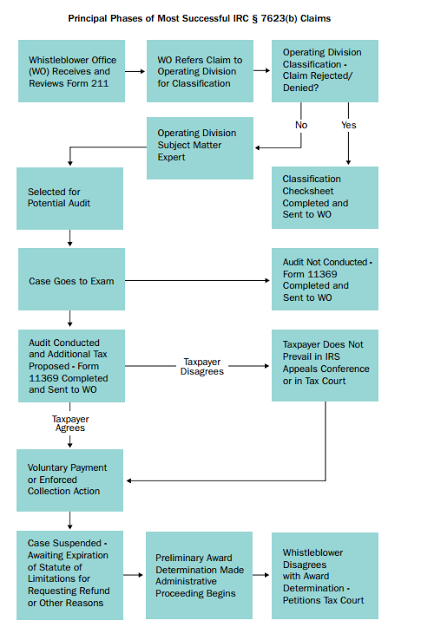