The IRS is slowly killing its whistleblower program 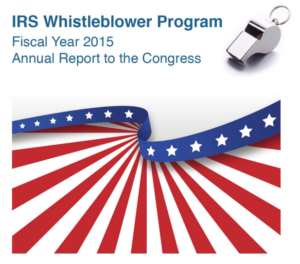 The IRS whistleblower report for FY2015 shows the program continues to have major problems.

The IRS Whistleblower Office released its 2015 report to Congress this week, which showed that the whistleblower program remains in need of critical changes.

According to the report, it took a little over 6 years on average for the IRS to process whistleblower awards. For whistleblowers whose claims of fraud don’t exceed $2 million, the wait times averaged nearly 9 years.

Whistleblowers helped the IRS recover $501.3 million in FY2015, but received just $96 million in rewards after sequestration. In contrast, the Department of Justice recovered $2.8 billion from 638 qui tam (whistleblower) lawsuits in FY2015, paying out $597 million in whistleblower awards.

“The uptick in awards paid out under the mandatory award program is good news,” said Sen. Chuck Grassley (R-Iowa). “Whistleblowers have long been frustrated with the lack of awards, which may be part of the reason claims were down 17 percent from previous years.  I hope the increase in awards will reverse this trend and send a signal of things to come.”

Grassley added  that “whistleblowers often put their livelihoods on the line to point out tax fraud, and they need assurances that the IRS will move their cases along as quickly as possible.”

The IRS, which still has 35,670 open whistleblower claims, could have recouped billions more for taxpayers if the IRS embraced working with whistleblowers to collect taxes owed.

Edward Arens, a whistleblower attorney for Phillips & Cohen LLP, explained in an article for Accounting Today why “information was already known,” is a problematic excuse for denying whistleblower awards. It is equally unacceptable for such a high number of cases to be brushed aside for an unexplained reason.

And the IRS knows it.