Why is there an Anti-Kickback Law in healthcare?

Kickbacks to doctors or other healthcare providers are prohibited by two federal laws: the Anti-Kickback Statute [42 U.S. Code § 1320a–7b(b)] and the Stark Law (42 U.S.C. 1395nn). Whistleblowers can work with the government to stop healthcare kickbacks and improper referrals and receive a reward by filing a “qui tam” lawsuit under the False Claims Act. 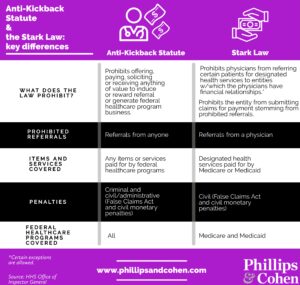 Medical and pharmaceutical kickbacks come in many forms. But in every kickback case, healthcare providers will provide some material benefit in return for other providers prescribing or using their products or services.

In most instances, kickbacks are illegal according to anti-kickback laws. Doctors are supposed to decide on the most appropriate treatment for their patients without consideration of their own financial interests.

Federal laws prohibit kickbacks and improper compensation to doctors and other healthcare providers as specified by the Stark Law because those financial incentives often result in medically unnecessary treatment and the use of more expensive products. That in turn results in higher costs to patients, Medicare, Medicaid and other healthcare insurance programs.

What is the Anti-Kickback Statute?

Under the federal Anti-Kickback Statute, a company commits fraud when it offers doctors and other healthcare providers financial incentives to use the company’s products or services, for which payment may be made under Medicare, Medicaid or other federally funded healthcare programs.

Examples of illegal kickbacks in healthcare can be cash payments, but often include other items of monetary value, such as gifts, free or discounted supplies or services, and travel.

Hospitals and other companies often try to disguise their medical kickbacks as legitimate payments. For example, they might pay doctors inflated rates for speaking engagements or pay above fair market value to lease office space.

Even if there is a lawful basis for a payment, the financial arrangement may still be fraudulent if one purpose of the payment is to influence a doctor or other healthcare provider to use the company’s products or services.

What are examples of healthcare industry whistleblower cases that involved the Anti-Kickback Statute?

What’s the difference between the Anti-Kickback Statute and the Stark Law?

The federal Anti-Kickback Statute and the Stark Law have key differences in what they prohibit and by whom, while sharing similar goals of protecting patients and preventing waste, fraud and abuse in government healthcare programs.

The Anti-Kickback Statute prohibits anyone from offering or receiving kickbacks in any form to induce or reward those who generate business involving the treatment of patients and services that are reimbursed by Medicare, Medicaid and other government healthcare programs. The Anti-Kickback Statute has some exceptions, referred to as “safe harbors.”

The Stark Law is more specific than the Anti-Kickback Statute. Stark prohibits physicians from referring Medicare and Medicaid patients for certain medical services to entities with which the physician or immediate family member has a financial relationship, with certain exceptions, or safe harbors. Stark does not require proof of intent.

Stark also prohibits health-industry entities from submitting claims to Medicare and Medicaid for services based on a physician referral prohibited by Stark.

How can whistleblowers report medical kickback schemes and Stark violations?

If you are aware of medical kickbacks or Stark violations and would like to get a free, confidential review of your case by experienced whistleblower attorneys, please visit our contact page. Phillips & Cohen works with whistleblowers on a contingency basis, which means there is no payment unless the government recovers funds from the case and pays the whistleblower a reward.