In FY2016, the SEC paid out more than $57 million to whistleblowers while also continuing its efforts to punish companies who sought to silence or retaliate against whistleblowers 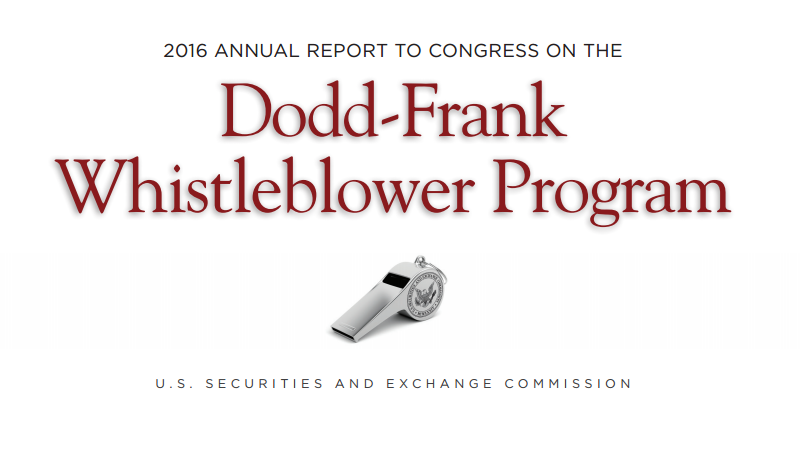 In FY2016, the SEC paid out more than $57 million to whistleblowers while also continuing its efforts to punish companies who sought to silence or retaliate against whistleblowers.

The Securities and Exchange Commission took significant actions in FY2016 that made it a “historic” year for the SEC whistleblower program, according to a new report from the agency.

The SEC paid out more than $57 million in whistleblower rewards during the last fiscal year, which ended Sept.30, and took major enforcement actions against companies that retaliated against whistleblowers or tried to silence them.

“This report reinforces what should already be clear to anyone paying attention: The SEC whistleblower program is a force to be reckoned with,” said Sean McKessy, the first chief of the SEC Office of the Whistleblower who recently joined Phillips & Cohen LLP as a partner. “The program continues to have a transformative impact on securities law enforcement and has been bolstered by the actions the SEC has taken that demonstrate its commitment to protect and reward whistleblowers.”

The SEC’s efforts to pursue companies that seek to silence or retaliate against whistleblowers also were notable in the past fiscal year. In September, the SEC brought an enforcement action against casino-gaming company International Gaming Technology for firing an employee for reporting to senior management and the SEC that the company’s financial statements might be distorted.

The SEC also filed actions against several companies for using separation agreements that barred or strongly discouraged employees from communicating with the SEC or from seeking a whistleblower award.

Whistleblower tips came in from 67 countries outside the US in FY2016. The program has now received tips from a total of 103 different countries. The largest sources of tips outside the US are Canada, the United Kingdom and Australia.

The SEC categorizes the three most common types of tips the program receives as “Corporate disclosures and financials,” “Offering fraud,” and “Manipulation.” Other types of tips that are common involve violations of the Foreign Corrupt Practices Act, insider trading and “trading and pricing.”