The Billions Lost to Healthcare Fraud

The Government Accountability Office reports that in fiscal year 2019, approximately $46.2 billion in improper payments were made in the Medicare program. And this may even be a conservative estimate! As we will discuss in a future post, other experts have opined that the amount lost to improper payments is two to three times the GAO’s estimate—as much as 20% of total spending.

Even using this conservative estimate, the recovery of this lost money would be enough to pay for federal funding of substance abuse and mental health services for well over a decade; it would be enough to eradicate global hunger for a full year, with $16 billion left over.

Some of this money is lost to waste and error, but much is lost to fraud. The False Claims Act is the government’s primary civil remedy to redress false claims for government funds and property under government programs, including Medicare and Medicaid. The Act was originally passed during the Civil War out of concern that suppliers were defrauding the Union Army.

However, since then, and particularly since the Act’s revitalization in 1986, recoveries have trended significantly towards the healthcare sector and away from defense. Between 2010 and 2020, total FCA recoveries totaled $40.2 billion. 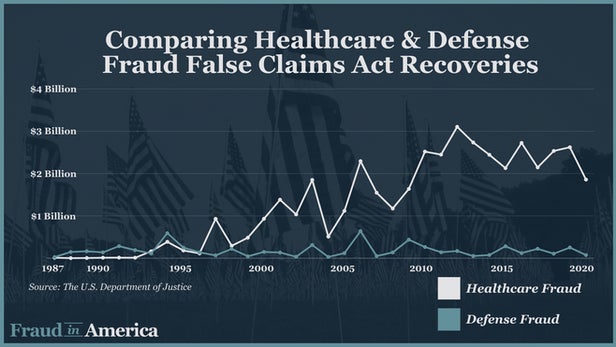 This article was originally posted as part of the “Fraud by the Numbers” series for the Fraud in America website by Taxpayers Against Fraud Education Fund, a public interest, non-profit organization dedicated to fighting fraud against the government by working to protect whistleblowers and strengthen whistleblower law.

She has handled “qui tam” cases involving Medicare and Medicaid fraud, Stark violations, kickbacks in the healthcare industry, overcharging by government contractors, cybersecurity vulnerabilities in tech products, customs fraud and other types of fraud against the government.

She also represents clients in whistleblower claims with the IRS and the US Securities and Exchange Commission whistleblower programs, including cases involving violations of the Foreign Corrupt Practices Act, a US anti-bribery law. has been recognized as a "Rising Star" for her work representing US and international whistleblowers.