Out of that total for False Claims Act settlements and judgments, $1.6 billion was due to qui tam lawsuits.

In FY 2020, the government paid $309 million to whistleblowers as rewards, based on their share of the recoveries from their qui tam lawsuits.

“These individuals often make substantial sacrifices to bring these schemes to light, and our efforts to protect taxpayer funds continue to benefit from their actions,” concluded Clark. 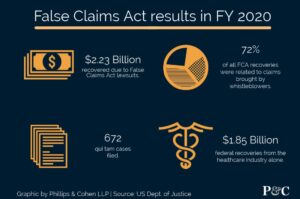 The largest portion of FY 2020 recoveries stemmed from fraud in the healthcare industry, primarily by pharmaceutical manufacturers. Healthcare settlements accounted for nearly $1.86 billion of the total recovered under the False Claims Act in FY 2020.

In the press release, DOJ highlighted kickbacks in the healthcare industry as particularly “pernicious because of their potential to subvert medical decision-making.”

Phillips & Cohen settled several qui tam cases alleging kickback schemes in FY 2020, including a whistleblower case against ResMed Corp, which allegedly paid kickbacks to suppliers and sleep labs. That case and four other qui tam lawsuits settled for a total of $39.5 million 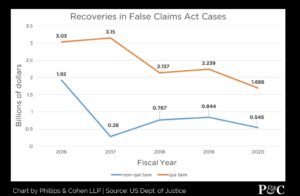 To date, the federal government has recovered more than $46.52 billion as a result of whistleblower cases since 1986, when Congress overhauled the False Claims Act. This total excludes billions in criminal fines and qui tam recoveries by state governments.

Phillips & Cohen is the most successful law firm representing whistleblowers, with recoveries from our cases totaling over $12.8 billion. We have been recognized for our work by numerous national awards. Our attorneys and cases have been in The New York Times, The Wall Street Journal, the Financial Times and other news media. Three of our cases were featured in the CBS series, “Whistleblower.” Phillips & Cohen’s roster includes former federal prosecutors, a former deputy administrator of the Centers for Medicare and Medicaid Services, the author of a leading treatise on the False Claims Act, the first head of the SEC Office of the Whistleblower and attorneys with decades of experience representing whistleblowers.