What is the Foreign Corrupt Practices Act (FCPA)?

The Foreign Corrupt Practices Act (FCPA) is a powerful anti-bribery law that prohibits US companies and individuals from paying money or any other sort of inducement to a foreign official to influence a decision or action affecting that company’s business.

The FCPA applies to foreign bribery anywhere in the world by publicly traded companies and their officers, directors, employees, stockholders and agents. Company “agents,” as covered by the FCPA, can be third-party agents, consultants, distributors, joint-venture partners as well as others.

The FCPA also requires companies whose securities are listed in the United States to meet certain accounting provisions, such as establishing and maintaining an effective system of internal accounting controls. Violations of the FCPA accounting provisions have been a major interest of enforcement by the US Securities and Exchange Commission.

The SEC and the Department of Justice, which jointly enforce the FCPA anti-bribery law, have pursued a number of significant FCPA cases in recent years.

Congress passed the FCPA in 1977, spurred by several foreign bribery scandals, including two separate cases against Northrop Corp. and Phillips Petroleum. Those companies’ use of corporate funds to bribe foreign officials was exposed by one of Phillips & Cohen’s founding partners and his public interest law firm at the time.

FCPA whistleblowers with insider information about bribery of foreign officials are essential to US enforcement of Foreign Corrupt Practices Act violations.

For example, “foreign officials” can be foreign military officers in charge of procurement contracts, ministry-level officials, and officers and employees of government-owned or government-controlled entities. This includes doctors who work for a country’s government, such as those in China.

FCPA whistleblowers can be citizens of any country and live anywhere in the world and still qualify for financial rewards through the SEC whistleblower reward program. 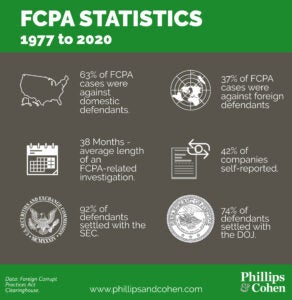 What are examples of FCPA whistleblower rewards for reporting bribery of foreign government officials?

The US offers FCPA whistleblowers awards through the SEC whistleblower reward program if the information results in sanctions exceeding $1 million.

Under the Dodd-Frank Act provisions, whistleblowers are entitled to 10% to 30% of the monetary sanctions collected in Foreign Corrupt Practices Act cases and other cases involving SEC violations.

US and international corporations have paid huge penalties to the US to settle Foreign Corrupt Practices Act cases.

How can FCPA whistleblowers report foreign bribery and corruption?

The SEC welcomes whistleblowers who have credible information about FCPA violations. The law promises confidentiality to SEC whistleblowers. They may even file their whistleblower claims anonymously if they do so through a lawyer.

Before deciding whether to become an FCPA whistleblower, it generally is a good idea to discuss your options and the benefits and risks with an experienced whistleblower lawyer.

If you would like to discuss your potential whistleblower case involving an FCPA violation or other securities law violation with a Phillips & Cohen attorney, please use our whistleblower contact form for a free, confidential review of your case.