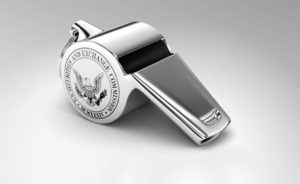 The Securities and Exchange Commission announced Friday that a $700,000 whistleblower award was paid to an industry expert whose “detailed analysis” lead to a successful enforcement action.

Most whistleblower awards are paid to company insiders who become aware of misconduct and choose to speak out. This time, the award went to a third-party observer whose specific knowledge of the industry helped him or her piece together a compelling case that significantly helped the SEC.

It is the first time an SEC award has gone to a company outsider.

“This award demonstrates the Commission’s commitment to awarding those who voluntarily provide independent analysis as well as independent knowledge of securities law violations to the agency,” said Sean McKessy, chief of the SEC’s Office of the Whistleblower.

As is customary with this type of announcement, publicly available details about the case are nearly non-existent due to the SEC’s legal requirement to protect the confidentiality of whistleblowers.