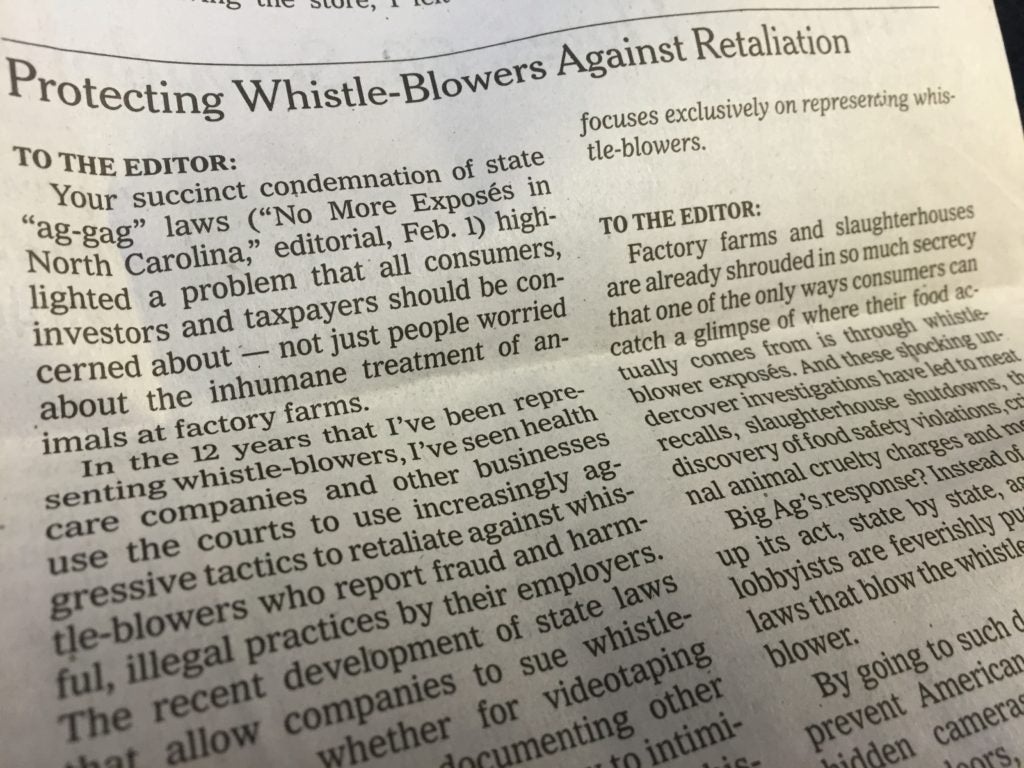 State legislatures should enact whistleblower protection laws to encourage those with vital information to come forward rather than laws that legalize retaliation against whistleblowers, as state “ag-gag” laws do.

Colette Matzzie, a partner at whistleblower law firm Phillips & Cohen LLP, makes that point in a letter to the editor published in the New York Times on Wednesday.

Responding to a NYT editorial on the controversial “ag-gag” law in North Carolina, Matzzie noted that the farm industry is hardly the only industry that would like to stop employees, or those posing as employees, from exposing outrageous and illegal business practices.

“In the 12 years that I’ve been representing whistle-blowers, I’ve seen health care companies and other businesses use the courts to use increasingly aggressive tactics to retaliate against whistle-blowers who report fraud and harmful, illegal practices by their employers,” Matzzie writes.

An “ag-gag” law is any type of legislation that silences whistleblowers who seek to expose animal cruelty by banning the use of recording devices on farms without the consent of the farm’s owner.

States should look to model new legislation off those laws and others that provide whistleblower protection, rather than laws that punish whistleblowers.

Your succinct condemnation of state “ag-gag” laws (“No More Exposés in North Carolina,” editorial, Feb. 1) highlighted a problem that all consumers, investors and taxpayers should be concerned about — not just people worried about the inhumane treatment of animals at factory farms.

In the 12 years that I’ve been representing whistle-blowers, I’ve seen health care companies and other businesses use the courts to use increasingly aggressive tactics to retaliate against whistle-blowers who report fraud and harmful, illegal practices by their employers. The recent development of state laws that allow companies to sue whistle-blowers — whether for videotaping animal cruelty or documenting other wrongdoing — is simply a way to intimidate individuals from blowing the whistle.

State legislatures should be considering ways they can encourage and reward whistle-blowers to help law enforcement, which will benefit all of their citizens, rather than enacting statutes that allow businesses to hide their criminal practices behind closed doors.

The writer is a partner at a law firm that focuses exclusively on representing whistle-blowers.